The Jindent Commander application is a graphical frontend to simplify the usage of Jindent's console tool. 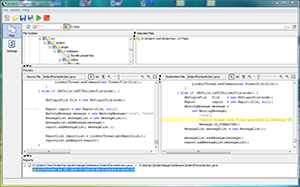 You can browse, select files to format, customize all your Jindent settings and compare formatted and original files for your Jindent projects. Due to the embedded extension manager, Jindent is able recognize source code files by its extension (for instance: java, c, cpp, h, hpp, js, sqlj) to choose the right formatting engine for every file. For ambiguous file extension like .h Jindent first tries to format this file as a C source code file and second as C++ source code.

Depending on the used installation package Jindent Commander can be invoked in several ways: